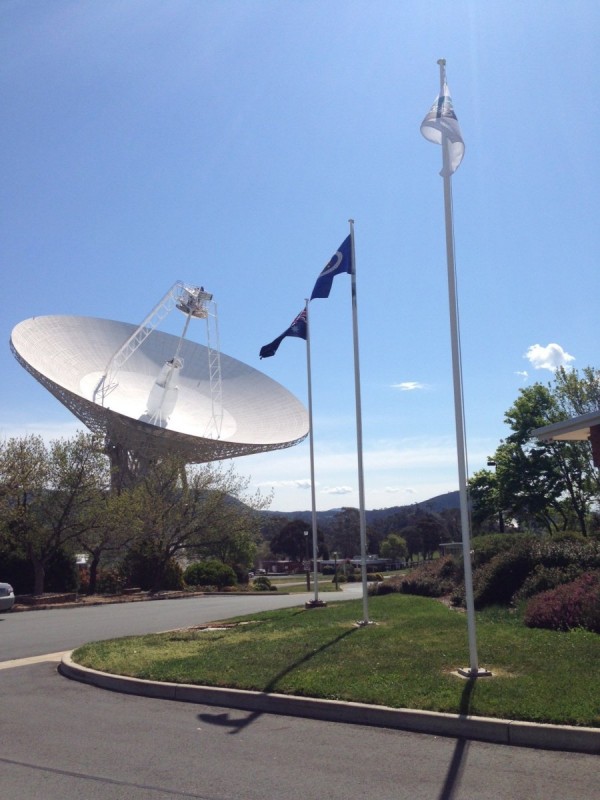 Kubbadang is a five part fictional series, set in Australia, on future space operations. Find parts one and two here.

Two men stood in the shadow of the Southern Hemisphere’s largest steerable parabolic antenna, Deep Space Station 43 at Tidbinbilla. Though only mid-morning, the dry summer was producing quick heating days and the smell of eucalyptus hung in the air. DDS43 whirred to life as it traversed. Group Captain Bob Stephens was SPOCOMD’s Director of Space Control. He had briefed the Space Agency Head earlier that morning and then driven directly to the Canberra Deep Space Communications Complex (CDSCC).

‘Can we do this without briefing them in?’ the Group Captain asked Dr Asim Bol, his advisor from Defence Science & Technology Group.

‘They’re radio engineers. They’ll recognise the waveform, so no. And we don’t have a plausible cover story for them anyway,’ Dr Bol responded.

‘Can we do it ourselves?’ Stephens persisted.

‘This is going to be a goat rodeo,’ Stephens muttered.

‘At least I have a recipe for shaiyah,’ joked the Sudanese-Australian engineer, easing the Director’s mood slightly. Stephens took a deep breath and walked into the conference room where twenty-one CDSCC scientists sat in various states of irritation.

‘Thank you for signing your Non-Disclosure Agreements,’ Stephens began. The audience was clearly in need of coffee. ‘We’re here to embark on a Special Partnership. It’s our first such arrangement with a civilian agency outside of the intelligence community.’ The atmospherics lifted to merely unimpressed. ‘You’ve been deemed ‘program critical’ by the Head of the Space Agency as per terms of reference released by the National Security Committee overnight.’ Puzzled looks darted between the scientists. ‘The following information has been declassified for the purposes of this project only. As you know, an international consortium called Apogee Incorporated launched an uncrewed mission to the Moon two weeks ago. It is assessed that its purpose is to place a small constellation of satellites into lunar orbit for a communications relay.’ Murmurs rippled through the crowd. ‘They recently completed their first soft landing on the Moon’s far side and now they plan to commence crewed exploration early next year. Ties between Apogee and nefarious non-state actors have also evolved. This presents a possible threat to the Artemis Moon Base. We intend to reengineer one of your antennas to intercept signals from their lunar relay.’ Stephens could feel sweat start to bead on his brow as the room went deathly silent. ‘We’ve brought a team from the ADF’s Joint Space Control Unit with the Interface Control Documents for their mission system. Please help them complete a desktop analysis of whether our two systems are compatible and direct any questions to Lieutenant Colonel McInnes, the Commanding Officer. I will provide a technical risk assessment to SPOCAUST later today.’ Stephens stood in the lifeless room waiting for a reaction from the bolshie scientists.

Dr Vicki Marks, the Chief Engineer, stood up with a groan. ‘Righto you lot. Get on with it.’ The scientists arose and meandered towards the exit and the tearoom beyond.

Down the corridor, a young engineer bombarded her colleague with concerns. ‘What the actual?! Did they just take over? It’s a coup… or conscription… or something…We’re scientists, not soldiers! Will this make us a target?’

We already were, thought Matt. She flicked through the ICD. ‘Intercepting signals, my arse. It’s a jammer. This has to be illegal,’ she hissed.

Matt had enjoyed Billie’s exothermic reactions since they were undergrads at Mt Stromlo. ‘Oh Pipe down, Billie,’ He started, trying to be the voice of reason, but Dr Marks interrupted him as she passed.

‘Yes, Billie. Don’t blow a fuse. Walk with me.’ Billie obeyed, with immediate remorse. ‘Be very careful, my dear,’ Dr Marks explained. ‘This is for collection. It is not a weapon. Apogee intends to land on the moon’s far side – out of sight. What if their intentions are hostile? We’ve got a local hero up there. Australia’s first female astronaut, no less… even if she was born in New Zealand. My point is, there’s no appetite for risk.’

Billie nodded pensively. ‘But it’s capable of so much more than that,’ she said, referring to the manual in her hands. ‘It can deliver cyber payloads, disrupting not just communications and on-board networks, but tracking and telemetry too. This is dangerous,’ she stressed.

Dr Marks looked firmly into Billie’s eyes. ‘All the more reason for you to be careful. Time will tell whether this was right or wrong.’