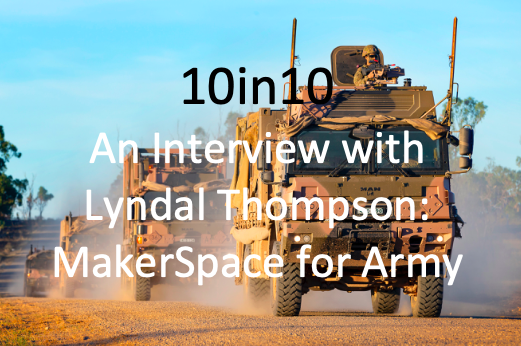 Samuel Cox (SC): What is a MakerSpace? What activities occur? What problem is it intended to solve?

Lyndal Thompson (LT): MakerSpace has come out of Director-General of Future Land Warfare Brigadier Ian Langford’s interest in developing a culture of innovation and a ‘thinking soldier’ in the Australian Army. He wants to find ways to encourage Australian soldiers to think creatively when problem solving. MakerSpace isn’t the only program that can achieve this, but it disrupts traditional thinking by taking people out of their comfort zone.

The focus is upon ‘tinkering’, rather than producing capability; though we might see the creation of a prototype that could be operationalised. We’re catering to those who learn through ‘doing’; we want bottom-up, disruptive (not top-down, linear) innovation.

The Army uses the Military Appreciation Process (MAP) to solve problems, but that is a very linear method. Often subordinates rely heavily upon their Boss to tell them how to solve problems instead of really engaging with a problem themselves. We want people to unlearn some of the more regimented thinking they are applying.

SC: One of the reasons we use the MAP is to provide a structure that guides how junior leaders respond to a problem. They don’t have the experience to make reliable, ‘gut instinct’ decisions.  The saying goes, ‘you need to understand the rules before you break them’. Should we be encouraging junior leaders to ‘break the rules’ and think disruptively before they have even fully mastered the MAP?

LT: Thinking disruptively doesn’t mean disregarding the MAP process, but being creative within that framework. Army has taught you all to solve problems in the same way. We need to give people permission to think differently in a risk tolerant environment.

SC: Is MakerSpace compatible with our service culture? Army has traditionally been highly focused on outcomes and the utility of things. What is the return on developing a “mindset of community, creativity and collaboration” or fostering “play, exploration and participatory learning”?

LT: If it is implemented, MakerSpace will need to be supported long-term because measuring success is difficult and qualitative. There won’t be an immediate outcome or output from introducing this to Army. The United States Marine Corps have gone through this cultural process already, but it has taken them several years to get the higher levels of command on board.

Success looks like our people approaching problem solving differently, and being able to access and utilise an ecosystem of MakerSpaces within the Australian Defence Force.

We’re still trying to ascertain if MakerSpace is a viable option and what a MakerSpace for Army actually looks like. We’re undertaking a ‘proof of concept’ first, before we consider the broader implications of implementation.

SC: What did you hope to learn from the pilot trial in November 2019?

LT: Twelve diverse soldiers (age, ethnicity, gender, etc.) from 1st Brigade came to the Flinders University MakerSpace for two days. We presented them a problem and we had a range of materials, including a 3D printer and a laser-cutter, in the MakerSpace for them to use.

Traditionally, in a MakerSpace, you wouldn’t present participants with a problem to solve; individuals bring their own problems to the space where there are resources to unpack the problem. But because we were testing the concept and only had a set amount of time, we manufactured it a bit.

This is what it would look like if we introduced MakerSpace to Subject One for Corporal and Sergeant. There is no pass or fail; it’s a learning experience and we want to understand how a MakerSpace changes your approach to a problem. We might see people skipping delivering orders and instead just playing with tools and taking a hands-on approach to solving the problem.

Dr Lyndal Thompson is a social scientist at the Australian Army Research Centre and manager of the Army Research Scheme. Prior to this, she has worked in several Australian Public Service research roles across education and agriculture. She has held postdoctoral fellowships with the Australian National University (ANU), CSIRO/Swinburne University and the University of New England (UNE). Her key areas of research include innovation, social-psychology of decision-making, community engagement and adult education. She has had work published in journal, conference papers, reports and an edited book.

Dr Lyndal Thompson pitched Makerspace at #DEFAUS19 which was held in Canberra from 30 Sep – 01 Oct 19.

FAQs and pitch guidance for #DEFAUS20 can be found here.