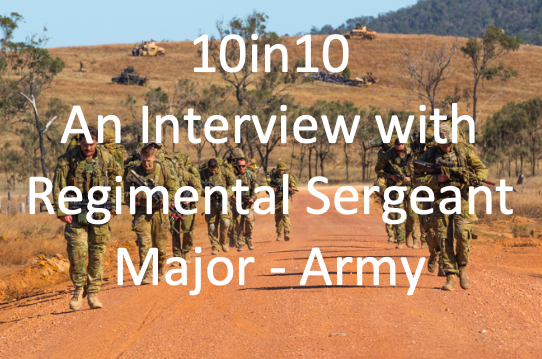 Chris Sharp (CS): What have you learned from the Chief of Army (CA) in the past year?

Samuel Cox (SC): You mentioned in that answer that the Chief of Army is encouraging us to think differently. You’ve been in the Army for a long time now. What ideas are you seeing nowadays that are entirely new?

GM: We are encouraging our soldiers to think about the future. They have a voice in our Army, and they can assist in the direction of our Army in Motion. Nowhere, in my time, has there been engagement this deep with soldiers and junior leaders.

SC: How does the work you and the Chief of Army do here in Canberra apply to and impact Army’s junior soldiers in units all across Australia? Why should they care about the Chief’s family of documents?

GM: Everything that comes out of the Office of the Chief of Army, especially these key documents, is about soldiers and their future. The strategic documents are informed by feedback from working groups that happen at lower levels. Nothing is done in isolation. We are endeavouring to set up our leaders and new capabilities for success. They will be the ones who develop the training, techniques and procedures (TTPs) and standard operating procedures (SOPs) for Army’s new capabilities. They should care, because it’s about their future.

SC: What do our junior leaders need to understand about Good Soldiering?

GM: Good Soldiering encompasses everything that we want to get after in our Army and is central to good character, forming teams and leadership. It’s about our core values and culture underpinning every individual in our Army: courage, initiative, respect, teamwork, looking after your mates, being honest and being responsible. It’s one of the best documents our Army’s ever come up with for our soldiers and leaders.

CS: What have you learned from failure?

GM: Don’t fear it and accept that you will make mistakes. Learn and adapt from those experiences. We need to support people to let them fail safely, then debrief on that failure, and go again.

About the Authors: Chris Sharp is a Squadron Sergeant Major at the Officer Training College within the Australian Defence Force Academy. He has been an Associate Editor with Grounded Curiosity since 2017. You can follow him on Twitter via the handle @SHARP_CR.

Samuel J. Cox is the editor of Grounded Curiosity. You can follow him on Twitter via the handle @samuel_j_cox