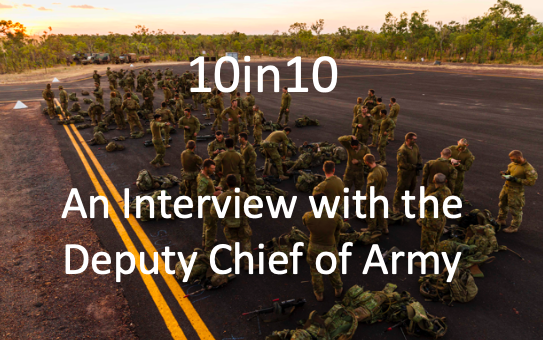 Samuel Cox (SC): What does the Deputy Chief of Army (DCA) do? Are there any issues/programs you are taking ownership of addressing/delivering during your time as DCA?

Anthony Rawlins (AR): There are four key things within the remit of the role. Under the Army Operating System introduced by this Chief of Army, I look after three out of four portfolio areas.  Firstly, I’m Head of People Capability. This involves traditional career management, but also attraction, recruitment, training, and retention of our people. Secondly, I lead the tracking and management of Army’s preparedness, which you can think of as the ‘fight tonight’ function. The actual capability outputs are delivered by Forces Command (FORCOMD), Special Operations Command (SOCOMD) and Headquarters 1st Division (1DIV), but I oversee how we track against the Chief of the Defence Force’s ‘Preparedness Directive’ which is more the enterprise and policy side of preparedness. Thirdly, I look after Army’s enabling functions: finance, governance, and risk.

I also understudy the Chief, who says, “the DCA runs the Army”. I don’t feel that way, as the Army runs itself, but in terms of day-to-day management I look ‘down-and-in’ in order to allow the Chief to look ‘up-and-out’.

Lastly, I am the mentor and advocate for all of Army’s Colonels. I provide them with advice and assistance, and I engage with them to get their ideas on the state of the Army. They’re an incredibly important cohort in terms of delivering the effects desired by Army’s Senior Leadership Group.

SC: With the Chief looking ‘up-and-out’, what is your left-and-right of arc? Are there Commander’s Critical Information Requirements (CCIRs) that trigger his involvement in the ‘down-and-in’ issues?

AR: I try to quantify and implement the Chief of Army’s intent and vision as articulated in his range of strategic documents: Accelerated Warfare, Command Statement, Good Soldiering, Army’s Contribution to Defence Strategy, Aide for Army’s Teams and the National Institution Statement.

He and I work closely together, and, of course, he also looks ‘down-and-in’, but I’m trying to give him the capacity to think strategically on behalf of the organisation. He leads strategic committees; I lead implementation committees. While he’s applying his considerable strategic acumen, Head of Land Capability and I take his maxims- like ‘Simplify the Army’, ‘accept risk in Ready Now in order to get after Future Ready’, and build ‘agility and scalability into Army’- and realise it.

AR: Workforce 2028 says that we need to completely transform our workforce system. That system worked in the past, but now it needs to be brought from the 20th Century into the 21st Century. It is one of the most exciting things that is going on in Army currently.

In the past, we built our model on a closed workforce system. We brought personnel in ab initio and trained them until they transitioned out of Army. Then we repeated that again and again. That model is brittle and not agile enough for the current environment.

Workforce 2028 rejects a binary separation between those people who are ‘in’ (full-time, service category [SERCAT] 7) and those who are ‘out’ (part-time, SERCAT 5). There is no such thing as being ‘in’ or ‘out’. You are Army for life. We will manage our Army as one complete workforce system. Whether we realise it or not, we are touched by this uniform; once you join the Army, you are indelibly marked. You always identify with the organisation, and it just depends what service category you are in.

We need to value things in our workforce which we’ve never valued in the past. For example, industry experience outside Army needs to be appreciated and factored into remuneration. Rather than just recruit people ab initio, we need to find ways to draw the Corporals, Sergeants, Captains and Majors who’ve left Army for a period in industry back into the organisation. We need to understand what are the ‘pull factors’ we can leverage and which of the ‘push factors’ we can undermine.

Workforce 2028 is going to ‘throw on its head’ so many of the fundamental assumptions and ‘sacred cows’ upon which Army’s workforce was built in the 20th Century. It’ll be more adaptive, and more appreciative of the full range of skills and attributes that are inside our workforce (irrespective of service category). It’s dynamic and exciting. We’re going to have to ‘build this aircraft while we’re flying it’ so the organisation has to get on board.

Major General Anthony (Tony) Rawlins is a graduate of the Australian Defence Force Academy and the Royal Military College – Duntroon. He commissioned into the Royal Australian Armoured Corps in 1989. The bulk of his command experience has been within the 2nd Cavalry Regiment and his most recent command appointment was as Commander 7th Combat Brigade.

Operationally he has served as a military observer on UNTSO, Commanding Officer of Overwatch Battle Group West in Iraq, and Chief of Joint Operations on Headquarters ISAF.