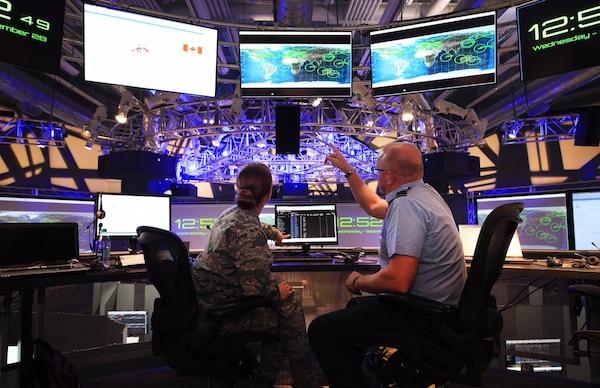 Billie and Matt sat in the DSS43 control room patiently awaiting moonrise and confirmation of the antenna’s lock onto the Apogee constellation’s signal. They were both grateful that these two events were again occurring in daylight. Only days earlier, arriving in time for pre-duty checks had meant running the gauntlet of dawn-grazing kangaroos on Discovery Drive. With the moon rising fifty minutes later each day, their start time would get more and more leisurely, until it became a night shift again.

With checks complete, Billie finished a bagel as she caught up on her news feed. A Google Earth visualisation on their screens showed the moon rising over the ACT’s eastern border. Like clockwork, the downlink arrived on their displays flowing like a blue-green waterfall. This was always followed by the artificial sound effect of a relay as the receiver fed the signal to the team from the Joint Space Control Unit. Click.

A moment passed. Click. Billie looked up. Something isn’t right. Why two? she thought. She found the cause. The antenna had switched from receive to transmit. Matt sensed her unease. ‘It’s been doing this the whole time. Their system’s an active sensor. It’s probably just probing.’

Billie counted the seconds as the dish continued to radiate energy. Eighteen, nineteen, twenty… ‘Bullshit,’ she said, knocking her chair over as she stood.

‘Geez, Billie! Where are you going?!’

She charged down the corridor to SPOCOMD’s temporary lab. Two soldiers were focused on the console of a server rack, flanked by Asim and Johnny.

‘What are you doing?!’ Billie roared.

‘Checking on the troops,’ said Johnny, attempting to defuse the situation.

‘Incorrect! But I can’t say why,’ replied Johnny.

‘So much for a Special Partnership. 43’s due for an unplanned outage!’ Billie shouted as she turned to leave.

‘A masking beacon,’ Johnny continued. ‘It’s what we’re transmitting to spoof the Apogee relay satellites, not the crew. Their craft will recognise a mismatch in the constellation’s telemetry and refuse to connect. As they pass behind the Moon without comms to Earth, their landing will be aborted and they’ll come straight home, safe and sound.’

Billie took a deep breath. ‘You people have lied to me before.’ With her audience lost for words, Billie stormed off to find Matt. She found him in the switching room sitting with Dr Marks. ‘Oh, Vikki…’ Billie said. ‘They’re jamming the Apogee mission!’

‘I know,’ Dr Marks said as she stood.

‘Huh? But why?’ Billie protested. ‘Who cares if they’re the first to land boots on the lunar far side?!’

‘Well, you remember the LCRT project reconnaissance back in 2030? Apogee plans to build a solar farm with power storage near Daedalus. Then they’ll sell us the power for the LCRT through the two-week lunar night.’

‘But isn’t that a good thing?’ cried Billie. ‘It’d save us a fortune.’

‘It would be if it were true. It’s a cover story. Their true motive is to establish a helium-3 mine, followed by a fusion reactor.’

Billie knew that helium-3 was a radioactive isotope present in solar winds and was suspected to accumulate in craters on the moon’s far side. ‘So they’ll have power in both day and night. But the presence of helium-3 is unconfirmed… it’s purely speculative.’

‘Apogee is credited by several member states of the Organisation for Petroleum Exporting Countries. They’re investing billions of dollars in prospecting before their oil is worthless. If the Apogee crew lands, they’ll begin in-situ resource utilisation immediately, not to mention the fact they’ll jeopardise the best radio telescope in the solar system if they mine Daedalus.’

Billie absorbed her mentor’s guidance. ‘Ok, but if that crew dies, their blood will be on our hands.’

SPOCOMD was still on a high after the first successful call for extraterrestrial fires. The plan had worked to a tee. The fire mission had initiated as the Apogee spacecraft approached its handshake window with the lunar constellation. Over the 32 hours that followed, the space fires transitioned from Tidbinbilla to Goonhilly, to Goldstone, and back to Tidbinbilla. The real coup was that the meaconing seemed to have gone completely undetected. Transmissions from the Apogee crew indicated they had followed their fault-finding procedures to the letter. They fought to connect to their constellation for over 13 hours, orbiting the Moon seven times before aborting.

Whilst the integrity of the Special Partnership and its security conditions had been preserved, calls had grown for jurisprudence in space to be improved. These had been championed by the Space Agency Head and had already produced agreements from Government for the formation of an interdepartmental Australian Space Security Centre. This was to be established under the Department of Science & Industry back at the Space Agency’s original headquarters in Civic to support whole-of-government space risk management. The need for improved international norms and legislated arrangements for space security cooperation between Australia, the US and the UK had also motivated the Government to appoint its inaugural Ambassador for Space Affairs.

Alli and Dan sat on the waterfront deck of ‘Five Ayes,’ SPOCOMD’s surrogate all ranks mess on the Russell foreshore, enjoying the sunshine and sweet spring air. A drone placed their Friday afternoon drinks on the table as they reflected on the events of the previous quarter. ‘What will happen next time?’ asked Dan. ‘Surely Apogee will try again.’

‘The purpose wasn’t to deny, but to delay. Our only priority in the short term was to sustain Artemis through Kubbadang. The allies didn’t predict the need to design, build and launch an impromptu lunar surveillance satellite. By the time Apogee tries again, we’ll be ready. In fact, Godspeed to them,’ explained Alli.

Dan sipped his Space Gin Smash. ‘One other thing,’ Dan began. ‘How did the Chief of Information Warfare become the Ambassador for Space?’