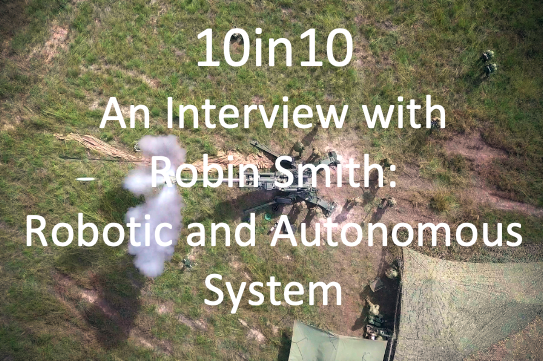 Samuel Cox (SC): Can you give readers the elevator pitch for the Australian Army’s Robotic and Autonomous Systems (RAS) Strategy?

Robin Smith (RS): The RAS Strategy is trying to create a framework to assist in thinking about how these types of systems, including artificial intelligence (AI), will enable Army to gain advantage in the future.

There are a lot of opportunities which sit in this space which we will not be able to capitalise on unless we start thinking about them differently.

We want to have RAS platforms widely available to Army in the next 10 years, but we want it to be informed by end user requirements. We need to figure out how it impacts our force structure and force design before we go ahead with large scale procurement.

SC: Can you speak to the RAS experiments undertaken in 2019?

RS: We undertook four activities in 2019 in order to start a conversation about what might be. First, an unmanned ground vehicle (UGV). 9th Force Support Battalion (9FSB) and 2nd General Health Battalion (2GHB) fielded six of these at Talisman Sabre after a series of training, techniques and procedures (TTP) development workshops. They are operator remote-controlled with a game controller interface. Initially, people looked at them sceptically because they’re not ‘big’; they can only carry around 750kg. Well, to a logistician that’s not a lot, but to an infanteer 750kg is a huge load. Perception is everything.

Secondly, with a university partner we are building two Land 121 trucks (40 M) with leader-follower and collision avoidance capabilities. What does that mean? By the end of 2019 we had two 40 M that will autonomously follow a lead-vehicle. That could be an unmanned autonomous vehicle (UAV), a person, or another vehicle of any description.

Thirdly, we contracted BAE to conduct a demonstration of autonomous M113s. This is less autonomous than we’d wish, as its leader-follower capability has limited collision avoidance and so relies upon an operator to get it where it needs to go. Currently we only get six dismounts per section from our M113s. If we could link these systems and operate them remotely, we could get two more dismounts. That’s 25% more combat power on the objective.

Lastly, we purchased two quadruped robots from Ghost Robotics in the United States. They look like a dog without a head, and we’ve named them Horrie and Kuga.

Army has tracked counter-IED robots and wheeled UGVs, but we wanted to experiment with legged robots. Currently, they are remote-controlled, but there is an autonomy capability. They will avoid running into something, and by the end of 2019 we had the software to enable them to climb stairs. So what? Well, the Army is going to operate in the urban environment and this space is designed for humans. Climbing stairs is difficult for a tracked robot, but with legs it is straight forward because stairs are designed for legs [laughs].

SC: How can we ‘prove’ these capabilities when we haven’t tested RAS in a warfighting environment?

RS: Well, we haven’t deployed our tanks in a warfighting environment and yet we have confidence that they will work. By prototyping and innovating, we’re trying to prove the concepts and nudge people’s ideas forward without presenting a solution. The M113 demonstration wasn’t necessarily about the M113 or automation per se. It is about demonstrating that if the Army had this type of capability, we could do things differently. We are trying to open people’s apertures.

Lieutenant Colonel Robin Smith is current the SO1 Robotic and Autonomous Systems within Future Land Warfare Branch of the Australian Army HQ, where he has been in post since November 2017. He recently authored the Australian Army Robotic and Autonomous Systems Strategy. He is a logistician by background and served for over 30 years in the British Army before transferring to the Australian Army.  He has commanded at all levels up to and including Regimental level and deployed a number of times.  He has a background in Electronic Engineering and has fulfilled a number of roles in the Joint logistics domain at the tactical and operational levels.