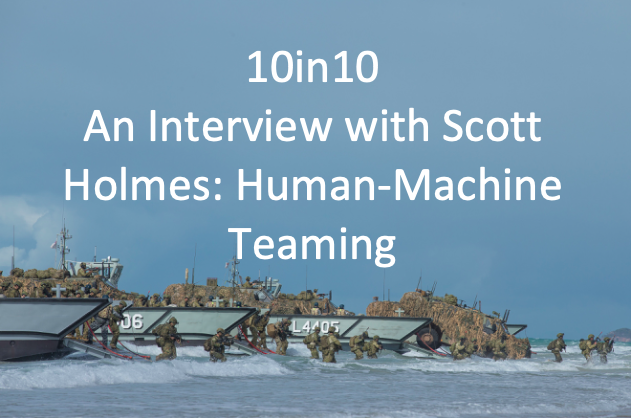 Samuel Cox (SC): Can you give readers the bottom line up front (BLUF) about the Soldier Combat System Program and the Australian Army’s work developing Human-Machine Teams (HUM-T)?

Scott Holmes (SH): The Soldier Combat System Program’s remit focuses primarily on the dismounted element of the close combatant system. Rather than being an analogue force that seeks to extend traditional capability into the 21st Century, we’re now looking at two forms of ‘mass’ that might give us a comparative advantage in the small team and close combatant environment: machines and data. The hypothesis is that using these more collaboratively with humans can give us faster decision cycles and action-responses.

SC: Why is HUM-T a step change for Australia’s close combatants?

SH: Today’s Soldier Combat System is analogue. We’ve maintained a comparative advantage regionally because the range, accuracy and lethality of our small arms has improved; our body armour has been capable of defeating the same improvements in lethality and accuracy that our potential adversaries have achieved; and because we’ve continuously improved the human performance factors of small team training, marksmanship, physical endurance and resilience.

These are the elements that have traditionally made the Australian close combatant a little bit smarter, a little bit fitter and stronger, a little better equipped, and a little bit more accurate with a more lethal weapon compared to the potential adversaries in our near region. As technology like night-fighting equipment and improved rifle sights become cheaper, they will proliferate, and that advantage edge will erode.

We’ll remain at the leading edge of capability and our performance will continue to be excellent in comparison to our peers for a little while. However, we might have once held a 50% advantage in those areas that gave us the initiative at the point of contact. That advantage might close to within 5% in the next decade, and therefore the assurance of creating and sustaining the initiative is nowhere near as likely as it once was. Now, if you’re a small nation with a small population and at par in comparing force on force, human on human, team on team; the advantage of larger forces will become decisive.

This is where the step change comes. We want to invert the ratio from 3:1 (where traditionally an attacking force requires three times the number of soldiers than a defending force) and either get to parity or, ideally, switch things around so that an Australian force is able to achieve the lethality, situational awareness and survivability effect of 1:3. That is, we can overpower a force three times our size because of the efficacy of our total system. That would include robotic platforms, vehicles, a suite of sensors and the human. It’s a layer of data which sits above that team and enables new forms of cooperation that seeks to ensure our teams are slightly better informed, that they can act slightly faster, and can do that continuously to create a cycle of sustained advantage.

SC: Whatever we develop in HUM-T can be used against us. Will HUM-T make the battlespace less survivable for Australian soldiers?

SH: Our potential adversaries could employ our systems, but I don’t think they will be able to do so with the sophistication that Australia can any time in the next decade. You can copy the products, but you can’t copy the system that brings it all together, including all the fundamental inputs to capability.

This is the difference that the Royal Australian Air Force (RAAF) has had over potential adversaries who have fielded platforms that are equal and equivalent to the actual air frames that the RAAF uses. It’s the entire system of maintenance, resupply, pilot training and ground crews that turns the RAAF into the equivalent of an F1 race car, rather than an amateur hobby-racer at the local go-kart track.

Similarly, bringing together a human and a machine team with high levels of trust that will ensure the team actually works cannot simply be bought off-the-shelf. I think Australia is much more likely to create an advantage, to sustain that advantage and to quite possibly develop an even bigger gap than already exists between us and our competitors because we understand the system better than anyone else – if we commit now to exploring, learning and leveraging.

If an adversary has little understanding about how these systems work, we can neutralise a particular effect, at the right time, to then create a window of opportunity. Those are smart defeat mechanisms. It’s our people that are the heart of this system, not the technologies.

Lieutenant Colonel Scott Holmes is an Australian Infantry Officer working in capability modernisation at Army Headquarters. Scott was a 2018 Chief of Army Scholarship winner and used this opportunity to commence a Doctorate of Public Leadership at the University of New South Wales. The study is focussed on the implications of a Fourth Industrial Revolution for Army.

For more from Lieutenant Colonel Scott Holmes, watch the recording of his Australian Army Research Centre seminar: Preparing the Australian Army for a Fourth Industrial Revolution.