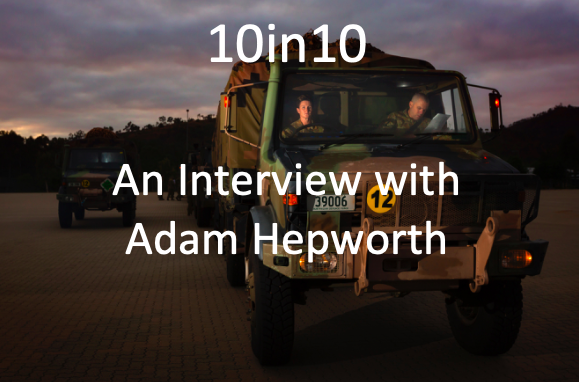 Samuel Cox (SC): How does a Transport officer end up an Operations Research Systems Analyst (ORSA)? Is your career replicable for others who share your interests, or are you a one-off?

Adam Hepworth (AH): I’ve held a lifelong affinity for Science, Technology, Engineering and Mathematics (STEM), and was fortunate to be sponsored by the Australian Army to do one of the top Master of Science in Operations Research programs in the world at the United States Naval Postgraduate School (NPS) in Monterey, California. I completed 41 coursework subjects and a 15-month research thesis in my two years studying there.

So, yes, it’s replicable and the ORSA stream is available to those in Army who have the interest. Eight people from Army have gone through the program over the past 20 years, and while you might expect people with the necessary skillsets to be found in RAEME (the Royal Corps of Australian Electrical and Mechanical Engineers) and Engineers (Royal Australian Engineers), the reality is we’ve had Medical, Infantry and Transport personnel complete the program too.

The ORSA stream doesn’t select for people with a specific corps skillset, but those with the right academic skills; an undergraduate and/or graduate level background in mathematics, computer science or engineering.

SC: What is an Operations Research Systems Analyst? As a professional quantitative analyst, what do you within the Australian Army?

AH: We’re a senior leader decision support tool. Like any Staff Officer within a headquarters, we provide advice that empowers our senior leaders to make better decisions. We try and distil all of the relevant information that exists in order to find the ‘critical path’ or ‘true signal’ so that senior leaders can make the best decision possible for the future Army.

There are three main areas within Operations Research that assist with decision making that we use: stochastic modelling, data science, and mathematical programming.

Stochastic modelling includes areas such as probability modelling and queuing theory. We’re trying to look at problems in terms of systems and defining the uncertainty within that system in order to better understand system dynamics. Data science refers to both farming and mining large data sets in order to find key causal information and predictors to support decision making. Lastly, mathematical programming optimises a system (like airline schedule routing, crew work-rest ratios, etc.) from a mathematical perspective.

In the last six months of study at NPS, you apply everything you’ve studied to various military contexts, which is where Army gets its value out of sending you to study there. We studied combat modelling, campaign analysis, operations analysis and analytical wargaming. For example, I did work during this period for the United States Pacific Fleet. We used shipping data, essentially GPS tracks of shipping routes, to inform where the Pacific Fleet should place different sensors, platforms and effectors throughout the region to achieve optimal influence results.

AH: Spot on. We’re not trying to replace commanders in the field who are employing the ‘art of tactics’; there’s a harmony between both our roles. We’re either operating at the very low level to understand what the best capability for a commander is, or we’re at the extremely high level considering a concept of operations for a campaign or theatre of war. We can help ensure that when tasks are given to a commander, they are the right tasks.

For more on Major Adam Hepworth’s work and research, watch this interview with a local TV show conducted during his posting to the United States and connect with him on LinkedIn. His research thesis from the United States Naval Postgraduate School is available here.

About the Author: Samuel J. Cox is the editor of Grounded Curiosity. Find him on Twitter.