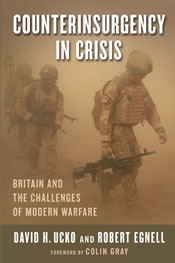 David H. Ucko was interviewed at the National Defense University in Washington D.C. His latest book, co-authored with Robert Egnell, Counterinsurgency in Crisis: Britain and the Challenges of Modern Warfare has recently been published See Emile Simpson’s book review here.  Some of David Ucko’s thoughts on junior commanders:

David H. Ucko, Ph.D., is the author of Counterinsurgency in Crisis: Britain and the Challenges of Modern Warfare (Columbia University Press, 2013), The New Counterinsurgency Era: Transforming the U.S. Military for Modern Wars (Georgetown University Press, 2009) and co-editor of Reintegrating Armed Groups after Conflict (Routledge, 2009). He has also published in a wide range of peer-reviewed journals.

Prior to joining CISA, Ucko was a Transatlantic Post-Doctoral Fellow at the Stiftung Wissenschaft und Politik (SWP) in Berlin, Germany, and at the RAND Corporation in Washington D.C. At King’s College, he examined the adaptation of the U.S. military for counterinsurgency operations in Iraq and Afghanistan, and worked for several years as a research fellow and program coordinator in the Department of War Studies, focused on conflict analysis and the challenges of third-party intervention in war-to-peace transitions.

During his career, Ucko has enjoyed visiting fellowships at several think-tanks and research institutes, including the International Institute for Strategic Studies (IISS) and the NDU’s Institute for National Strategic Studies (INSS), both in Washington D.C. From 2001-03 he served as Deputy Defence Analyst (Armed Conflict) at the IISS office in London, where he helped create and develop the Armed Conflict Database.